For thousands of years, people have found their way to the dunes, and used them for a myriad of purposes. They have been a gathering place, a place of sustenance, a means of transportation, a playground, and an anchor to a way of life.

The early people of the dunes are the ancestors of the Coos, Lower Umpqua, and Siuslaw Indians, who continue to live in the area despite the dramatic changes to the landscape. Still important territory for these tribes, the dunes area provided their ancestors with a wealth of salmon and lamprey, clams and mussels, berries and roots, as well as deer and elk for eating and trading.

In the late 1700s, the first European explorers began sailing along the Oregon Coast, and by the 1800s trappers were scouting and running expeditions on land. The abundant resources and access to shipping routes continued to attract people to the Oregon dunes.

By 1908, much of the dunes area, along with coastal forests to the north, had been declared part of the Siuslaw National Forest by President Theodore Roosevelt, and homesteading continued for another two decades. The shifting sands proved challenging for homesteaders, though, and many dunes-area claims were abandoned over time.

Transportation was another ongoing challenge. Before the highway came along, stage routes along the beach were often the only way to move people and goods up and down the coast. Horse teams would race the tides using the firm, wet sand as nature’s best approximation of pavement. And shifting sands at river mouths created hazards for ship captains, who occasionally found themselves moored on sand and unable to deliver their goods up river.

When Highway 101 was finally completed along the coast in the 1930s, it didn’t put an end to the challenges of life on the dunes. Wind-driven sand would bury roadways like drifts of snow. For a region that in the early part of the 20th century was beginning to boom with industry and tourism, the unreliability of life on the dunes was a pressing concern.

European beachgrass was among several non-native species planted to stabilize the dunes, beginning in the early days of the 20th century. By the 1930s, it was clear that the imported plants were well adapted to reduce the shifting sands on the dunes. They were thriving and spreading.

With its deep spreading rhizomes – underground stems that can send out shoots and roots for long distances – European beachgrass was colonizing open sand at a rapid rate. It was able to out-compete and overtake its cousin, the more sparsely growing American beachgrass. It also displaced many of the grass and herb communities. Planting efforts to continue to stabilize the dunes continued in earnest into the 1950s, and occasionally beyond.

Over the course of the last century, people who love the dunes began to see a shift in the landscape, at first subtle and later more pronounced. The domino effect on dunes life had begun.

Where once the wind-driven sand kept the landscape, and the vegetation, in constant flux, the movement had stopped or slowed, and permanent wetlands and woodlands were taking the place of what had once been open sand.

Today, it is up to us to restore and preserve it. 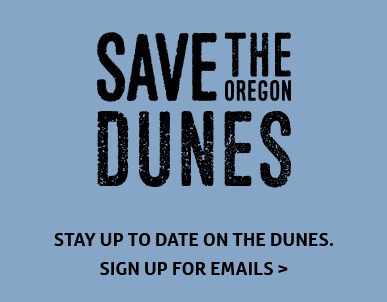